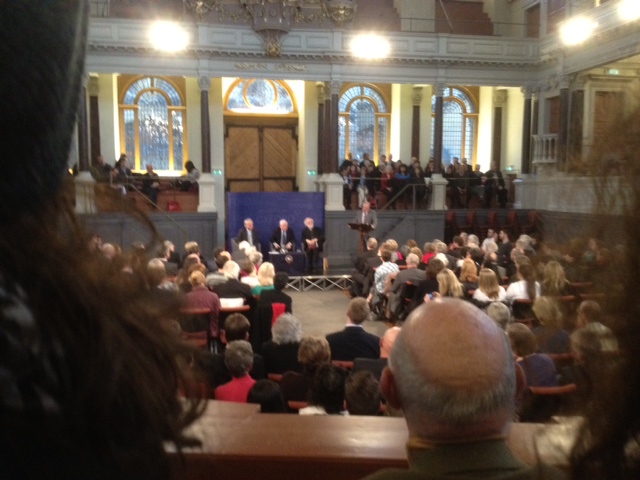 DAWKINS VS. WILLIAMS: A PUT UP JOB? OR MORE COMMON GROUND THAN WE THOUGHT?

On 23 February 2012, I attended the debate at Oxford’s Sheldonian Theatre between the Archbishop of Canterbury and the Arch-New Atheist, Richard Dawkins. The topic up for discussion was the “The Nature of Human Beings and the question of their Ultimate Origin.” Fifty tickets were made available to non-Oxford students and I made it up at 3am in Texas on the only day of online sale to get my two.

The rise and rise of atheist public commentary, spearheaded by Dawkins and the Richard Dawkins Foundation for Reason and Science, marks a sea change in British cultural and intellectual thought. Dawkins is giving name and form to decades of British religious apathy and disinterest, discretely veiled all the while in positively British good manners, and a broad appreciation for religion’s role in providing social order and its work for charitable causes. The elephant in the room for so many for so long, however, has been quiet discomfort with the notion of a creator god. Dawkins is fed up what he sees as this distracting and irrational notion, along with the obfuscations he thinks creationists bring into education, and is resoundingly prepared to say so.  But ever since reading a hatchet job by Martin Seymour-Smith’s on the “the archdunce Dawkins,” I have been intrigued by the level of animosity engendered by this apparently reasonable, and obviously intelligent man.

Much has been said in the press since the debate about Dawkins’ apparent concession to agnosticism in his statement that he is “6.9 out of seven” certain of the absence of God but that “the probability of a supernatural creator existing is very, very low.” This statement has gained remarkable traction, and most especially in the copy of media hacks who were not present to hear it. I hazard that few in the Sheldonian audience were in any doubt that Dawkins’ concession of 0.1 point out of seven to the possible existence of a god was anything other than a logical acknowledgement of that which cannot be proved. What is surprising, however, about this commentary from these absent parties is not only the puerility of the reaction, but the intellectual laziness of the commentators who speak inadequately, if at all, to the rhetorical context of the debate. One of the reasons Tim Stanley (a historian) of the Daily Telegraph goes to church, apparently, is that is that he doesn’t want “to run the risk of spending eternity in Hell with Richard Dawkins.” Funny, but basically, cheap schtick at the cost of any useful insight, historical or otherwise – and good luck to his fellow parishioners, by the way.  Al Webb, in the Huffington Post, describes Dawkins as “the controversial Oxford University professor billed by many as the world’s “most famous atheist” (who) now says he is not 100 percent sure that God doesn’t exist — but just barely.” Barely stifling a laugh himself, Webb then goes on to recount “the amusement of the Archbishop and others” at Dawkins’ dialectical naïveté.

The feeling that Dawkins is not taken seriously was so palpable during the Sheldonian debate that it skewed from the outset a potentially fruitful discussion.  Another source of cognitive dissonance for the audience was the shifting contextual basis for this meeting which seemed to lead to divergent approaches by the speakers.  The meeting itself was publicized and ticketed as a “conversation” between Dawkins and Williams; however, almost all the subsequent publicity promoted the meeting as a debate. Sometimes the audience seemed to be genuinely uncomfortable when Dawkins appeared to be thinking aloud, rather than offering a formal strategic response to a question.  At other times, the same audience could be heard to shuffle and snicker when Dawkins appeared – and in fact claimed openly — to misunderstand a the term “epistemic”; very certain ground for the philosopher Kenny and, doubtless, for Williams, but not usually part of Dawkin’s working register as a scientist. There certainly was a good deal of snickering going on, usually garnered by a comment by Dawkins, both on the part of those with whom he shared the stage–the moderator, the philosopher, Sir Antony Kenny, and the Archbishop, who referred to the former as “Tony”—and on the part of the audience.

Dawkins held closely to a conversational style throughout, but it seems clear that his approach wrong-footed his audience, who were expecting the more familiar cut-and-thrust of formal debate.  Rowan Williams, however, was to play it both ways. He joined in with the advertised conversational character of the event, but also employed rhetorical strategies associated with the debate form, including his frequent questioning of Dawkins, which came across both as a strategic deflection of attention onto his opposition and as a play for time. His use of self-deprecating wit was a crowd-pleaser, as was his cloaking of a critical retorts with the phrase “I find this very interesting.” Indeed, Williams was the more engaging speaker and, I suspect, the better-prepared debater.  Could it be that Richard Dawkins was himself wrong-footed by the Archbishop on contextual grounds? Or did he just not fully appreciate his rhetorical situation? He was certainly too busy trying to deal with Williams’ many questions to be able to mount anything that resembled a considered offensive. The terms offense, defense, antagonist, opposition—all seemed to have fallen away from Dawkins’ rules of engagement manual for the duration of the meeting.  Also, and I leave this as an aside because I know nothing of the relationship between Kenny and Williams, it was clear from the benches that the moderator’s allegiance was to Williams.  I say this for a number of reasons, but primarily for the time Kenny allocated to personally questioning Dawkins, where at once, unfitting for one supposed to be moderate, he seemed to be doing much of the Archbishop’s work for him. None of this is to say that Dawkins needs an apologist in the realm of public debate; he has amply demonstrated his abilities as a speaker, writer, and thinker. The overriding impression I came away with, however, was that Kenny and the Archbishop had been let in on the joke, whatever it was, and that Dawkins had not.  It was also disappointing that, while Kenny and Williams stood shoulder to shoulder as philosophers during the first three sections of the debate, the Archbishop only truly emerged as a theologian in the last component, “On the Origin of the Universe.”

I listened closely for areas of common ground between Williams and Dawkins, and found some, such as a general acceptance of evolutionary theory (just a difference as to who’s in charge of it), and a general appreciation for the remarkable complexities of nature revealed by science. It would have been fruitful to explore more of these points of convergence. Although it would be naïve to suggest that either side of the debate would necessarily want to find common ground as such, it may be that somewhere between the Faith/Reason polarities is our next evolutionary step.  The Christian humanist position (sometimes called Yeshuan Humanism)–where a rational humanist position is allied with a Christian moral framework shorn of the supernatural—seems a feasible melding of the Dawkins/Williams strands, and could be useful to the rational progress of religious form. There is already a quiet coexistence of Christian believers with atheists in British and American Christian circles, amongst both clerical and lay communities (see On Faith, the Newsweek/Washington Post website on religion, http://newsweek.washingtonpost.com/onfaith//2010/03/disbelief_in_the_pulpit/all.html). It may be time to acknowledge these differences, express them, and find ways to move forward, together. The practice of “interfaith dialogue” is could assist here: both positions, one of faith and one of no faith, require a leap beyond what is known, and are positions founded on belief. Back we come to the 0.1 point out of seven. Identifying a convergent stance in his book, Between the Monster and the Saint, Richard Holloway describes the After-Religionist, one who views God as a mythological construct and religion as possibly the greatest human work of art we have. Respect and appreciation for religious forms combine here with science, reason, and the acknowledgement of the importance of the teachings of the man, Jesus Christ.

Dawkins, then, far from being a dunce, is not alone in thinking that somewhere in the convergence of humanism and faith, lies the beginning of the rise of our species to its full, autonomous height, encouraged so assiduously by Dawkins’ fellow Horseman, Christopher Hitchens; the arrival at a point in human history when we finally may utter a resounding “yes!” to the unmiraged view of humanity and its place within the natural order.  And, with any luck, we can get enough of a move on for this to happen some time before we are all dusted by Andromeda.  I leave you with one last foray by Dawkins into this common territory in potentia which reads thus: “perhaps the oxymoronic impact of “Atheists for Jesus” might just be what is needed to kick start the meme of super niceness in a post-Christian society. If we play our cards right–could we lead society away from the nether regions of its Darwinian origins into kinder and more compassionate uplands of post-singularity enlightenment?” (”Atheists for Jesus,” 2004).  To borrow from the language of evolution, I think this one has legs.